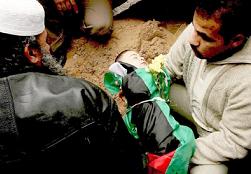 The is experiencing a new escalation in the violence between Israeli soldiers and Hamas militants. According to the analysts, the only way out involves the reestablishment of a framework for global negotiation between the Israeli authorities and the Palestinian factions of the West Bank and Gaza, an option that could lead to the creation of another National Unity Government, provided that an agreement is reached beforehand. But in order for this to happen, the author states that must renounce its project of getting rid of Hamas by force.

(From ) THE UNITED NATIONS SECURITY COUNCIL condemned ’s disproportionate and excessive use of force against the civilian population of the Gaza Strip, while simultaneously asking Islamic radicals to immediately cease firing Qassam missiles into Israeli localities. Despite the condemnation, the Israeli army decided to continue its deadly operative against the strip. “The military intervention is only carrying water to the mills of the Islamic radicals”

In spite of the warnings of the most educated diplomatic representatives of the United Nations Headquarters, the armed Palestinian factions opted to keep the settlers of Sderot [1] and Ashkelon [2] in check.

In both cases, the opponents have supported the most intransigent option: the escalation of violence. Even so, both parties are conscious of the fact that the solution to the conflict does not lie in the armed struggle, and that the enemy will be difficult to defeat.

THE MOST CALCULATED STRATEGY

“The Tel Aviv establishment’s maneuvers to surround Hamas generated a sympathy wave towards some type of movement in and the vast majority of Arab countries”It is appropriate to point out that Operation Hot Winter (Israel always finds very appropriate names for its military offensives) reflects the failure of the stratagem devised years ago by the politicians in Tel Aviv, who were looking to neutralize the project to create a Palestinian State in the West Bank, Gaza and East Jerusalem.

In effect, ex-prime minister Sharon [3] was attempting to separate the territories and divide the Palestinian population. However, Hamas’s victory in the 2006 general elections and the taking of in 2007 completely changed the specifics of the problem.

The Tel Aviv establishment’s maneuvers, whose aim was to surround the Hamas government and force it into complete isolation on the international level, generated a sympathy wave towards some type of movement, in Gaza as much as in the vast majority of Arab countries. “Hamas’s message is (at least in appearance) very simple: the Jewish State will not be able to ignore its presence”

Some analysts believe that the January 23rd opening of the border with , far from being a desperate gesture by a government obliged to cover the basic demands of a hungry population, has been interpreted as a political victory for the Islamic resistance.

Even though it is certain that Hamas is not in a condition to face up to the status quo brought about by the prolonged closing of the border crossings with , it is also true that the military intervention is only carrying water to the mills of the Islamic radicals.

In this fierce clash, Israelis and Palestinians are pursuing completely different objectives. “Israel thinks a hypothetical ceasefire could pose a potential threat to the Jewish State’s security”Apparently the authorities of Tel Aviv have made their goal the political and military defeat of Hamas, the fall of the Government led by Ismail Haniyeh [4], and the dismantlement of the missile bases, which have turned into a constant nightmare for the inhabitants of the frontier region.

In turn, the Islamic Resistance Movement wants to take advantage of the opportunity to assume the political leadership of the Palestinian population, turning into the Israelis’ privileged negotiator. Hamas’s message is (at least in appearance) very simple: the Jewish State will not be able to ignore its presence. The cessation of the bombing has to be negotiated by the movement’s staff. “More than the half of the conservative Likud’s voters would support dialogue with the Islamic movement” It is obvious that ’s bomb makers are capable of producing and storing numerous explosive devices whose operational range has increased from just one kilometer only a few years ago to more than ten kilometers. It is estimated that the range of the Qassam missiles could soon reach around , making it a potential threat for the industrial city of .

Hamas’s leaders do not seem very inclined to sign interim agreements with Tel Aviv, as the members of Fatah’s executive did when that party was in power. The truce could be limited to being a mere understanding. For its part, the Israeli Government thinks a hypothetical ceasefire could pose a potential threat to the Jewish State’s national security, since it would facilitate the rearmament of the supposedly decimated Islamic militias.

It goes without saying that the percentage of the Israeli population willing to negotiate with Hamas is on the rise. According to polls carried out last week by Tel Aviv newspapers, more than half of the conservative Likud [5]’s voters would support dialogue with the Islamic movement. Even the ex-head of the Israeli National Security Council, Efraim Halevy [6], is in favor of a possible agreement with the radicals.

One person who does not appear to be willing to travel down the path of negotiation is Ehud Olmert [7], who assures that the (peace) process will be long and painful because miraculous solutions do not exist.

On the eve of the American Secretary of State, Condoleezza Rice [8], and the EU’s High Representative for the Common Foreign and Security Policy, Javier Solana [9]’s arrival to the region, the Israeli and Palestinian political scientists seem to be opting for the third route; that is, the reestablishment of a framework for global negotiation between the Israeli authorities and the Palestinian factions of the West Bank and Gaza. This option would allow for the consideration of an agreement capable of culminating in the creation of another National Unity Government.

But in order for this to happen, must renounce its project of finishing the pestering Hamas off once and for all.