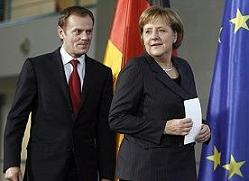 The failed meetings between and are numerous and complex. Poland continues to view Russia as a threat, but Donald Tusk’s brand new cabinet intends to confront its great neighbor with a new strategy: to promote negotiation in view of the conflict. The objective of is two-fold: to win allies that reinforce their position with respect to and to promote a more united stance within the heart of the European Union, one critical of the Russian excesses.

(From ) THE GREATEST ADVANCE IN THE RELATIONS between and has been felt in relation to the exportation of Polish agricultural products to , which is going to be renewed after more than two years of Moscow-led prohibition. In this way, the Kremlin is responding to ’s announcement this past January that it will no longer oppose the ’s admittance into the Organization for Economic Cooperation and Development (OECD [1]). “Tusk has asked the to defend its antimissile shield to , and insists that should receive some compensation”

This result is good news for the European Union, whose negotiations to sign a new Association and Cooperation Agreement with had been stalled as of the end of 2006 due to ’s veto.

It now appears like said boycott is about to end, but according to the Polish Foreign Minister, Radoslaw Sikorski [2], the decision still hinges on Brussels’ commitment to obtain, in any one of its agreements with Russia, guarantees regarding the Union’s energetic security.

NO CONSENSUS REGARDING THE AMERICAN ANTIMISSLE SHIELD

“Poland fears that Russia can cut off their gas supply without there being any repercussions in the rest of the European Union” It looks like arriving at some type of consensus regarding the possible installation of an American antimissile shield on Polish soil is a more complicated matter. In opposition to the former government’s position, which was one of submission to Washington, Tusk [3] has declared that said initiative cannot put Poland’s safety at risk, and will not be carried out without taking due precautions.

Consequently, Tusk has asked of the that its leadership defend the project to (instead of expecting to assume this difficult task), and that the shield be integrated into NATO’s security system. Aside from this, Tusk insists that his country should receive some compensation, such as substantial improvement of its anti-aircraft defenses against a possible Russian attack. “The Polish government has tried to revive the Ámbar gas pipeline, which would cut across , , , and until arriving at . has rejected the proposal”

But the caution displayed by the Polish leader, who visited a few days ago, has not calmed Russian spirits. The Kremlin continues to believe that the anti-missile shield represents a threat to their security and rattles the balance of forces in the region. Its objective is to make the project fail, but if it is unable to achieve said goal, it has announced that it will demand that its inspectors be able to oversee the shield’s installation.

Another cause of friction between both countries over the course of the past two years has been the construction of the so-called North gas pipeline, which will transport gas across the Baltic Sea from the Russian port to the German port .

FEAR REGARDING THE GAS SUPPLY…WHICH CONTROLS

“Poland’s objective is to gain allies that reinforce their position with respect to their great neighbor, and to promote within the heart of the European Union a united stance against the Moscow’s excesses” The exclusion of Poland from this big energetic initiative meant an increase in tensions with Russia as well as Germany, causing Jaroslaw Kaczynski’s cabinet to compare this event with the signing of the secret Molotov-Ribbentrop Pact in 1939. The new Polish government has tried to revive the so-called Ámbar gas pipeline, which would cut across , , , and until finally arriving at . According to they would be dealing with a less complex pipeline that would have less of an impact on the environment, but has wasted no time in rejecting the proposal, assuring that its cost would increase substantially.

Meanwhile, the concern of and its Baltic neighbors is growing, as they watch the opportunity to obtain important revenue from the gas pipeline’s path through their territory slip away. Above all, and the Baltic States fear that can cut off their gas supply without there being any repercussions in the rest of the European Union.

In short, the unresolved matters between and are numerous and complex. continues to view as a threat, but for the moment Tusk’s cabinet is trying to confront its great neighbor with a new strategy. Its intention is to promote negotiation in view of the conflict, but the fact that these demonstrations of good will are not sufficient for the Kremlin is not lost on anyone. ’s grand objective is to gain allies that reinforce their position with respect to their great neighbor, and above all to promote within the heart of the European Union a more united stance, critical of the Russian excesses.