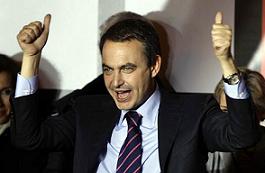 Moving beyond the lessons that the nationalist parties and the communist left (IU) should take home from their loss of votes to the PSOE, the only statement that is valid today is that the general elections in have only one winner: José Luis Rodríguez Zapatero [1]. Even if the PP has increased its presence in parliament, today it constitutes more opposition than it did four years ago. Mariano Rajoy’s strategists have failed.

(From ) THE MARCH 9 ELECTORAL RESULTS have corroborated all of the voting orientation tendencies that had been clearly demonstrated since the end of autumn 2007. The Spanish Socialist Workers’ Party (PSOE [2]), in a political scenario similar to the one in 2004, would triumph in the elections by a margin of between three and four percentage points.

“Could it be that the position taking that some consider the result of the socialist leader’s immaturity are in reality highly calculated maneuvers?” The day’s only surprise was the electoral collapse of who have been the socialist government’s principle partners during this term: the communist left and the pro-independent Catalans lost more than half of their parliamentary strength. The bear hug worked with great accuracy.

There are still some people who think that the president and his team are randomly guided by events, that in each and every occasion they let themselves be influenced by a position, or go against it, and that they maintain different opinions depending on the political times, as Rajoy [3] expressed during the televised debates. Perhaps this is the truth, but in light of the results obtained, above all in and the Basque Country, it does not look that is the case.

It is more than widely known that the PSOE wins national elections thanks to the support of an subsidized by the rest of the communities. But on this occasion, its excellent performance in and the Basque Country was added to the southern community’s support. Could it be that the position taking that some consider the result of the socialist leader’s immaturity are in reality highly calculated maneuvers?

TWO DISCOURSES, ONE STRATEGY AND SOME IMPORTANT RESULTS

“Perhaps the leader of the PP thinks that by 2012, his daughter will already be more grown-up” It looks like the discourse of constitutional patriotism wielded by the PP [4] during the term has had success in those communities where the presence of non-national minorities is small or non-existent: Madrid, the Community of Valencia, Murcia, whereas the alternative version of that very discourse, the one espoused by the Socialist Party, has had success precisely in those communities with noticeable non-national minorities: the Basque country and Catalonia.

“Perhaps Rajoy will be more sensible the next time he surrounds himself with electoral analysts that had already erred in their interpretation of the opinion polls in 2004” If negotiation with ETA and the passage of the Statute of Catalonia strengthened the PP’s discourse and its success in the communities lacking non-state parties, it looks like those very same political processes have improved the socialists’ position in those autonomous communities with important nationalist forces.

It is not probable, although the right-leaning analysts surely interpret it as such, that the territorial breach has lost strength in these elections.

What is surely clearer is that part of the nationalist conscience (the left side) was, on this occasion, able to express itself well in a vote for the socialist party.

A WINNER AND MORE OPPOSITION

“None of Rajoy’s advisers came out on the balcony on Calle Génova on Sunday night, although, for what: they are examples of those people who continue to think that their reality is everyone’s reality” Moving beyond the lessons that the nationalist parties and the communist left should take home from these elections, which, by the way, will be few (the leader of the IU is resigning and warns that he will no longer be there to coordinate the coalition, while its group in the Basque Country continues to support the mayors that do not condemn terrorism), the only statement that appears to be valid today is that the elections have only one winner: José Luís Rodríguez Zapatero.

And Rajoy? Well the PP members seem content, as they have increased their numbers in parliament and seem happy to be more of an opposition than they were four years ago. This is inexplicable. Perhaps the party leader thinks that by 2012, his daughter (already baptized as Victoria Esperanza) will already be more grown-up. Or perhaps (although I doubt it) he will be more sensible the next time he surrounds himself with electoral analysts that had already erred in their interpretation of the opinion polls in 2004, or by image consultants that sell him the idea of a daughter that already seems to have traveled throughout the bulk of the world (perhaps she is not as young as we thought), or by consultants that without having ever listened to an immigrant in their lives want to draw up an integration contract for him.

None of them came out on the balcony on Calle Génova (the street on which the PP headquarters is located) on Sunday night, although, for what: they are examples of those people who continue to think that their reality is everyone’s reality. Once again, they made a mistake.