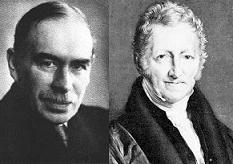 The strong rise in food prices worldwide has diverse and complex causes, but the situation can be summarized in the following: the demand has risen much more than the supply. If developed nations fail to recognize this, and fail to put fresh money towards the subsidy of food for the poorest, millions of people could die of hunger. The author recommends increasing the global supply of food (through existing technology and science), subsidizing food for the poorest, and implementing free trade worldwide in agriculture.

(From ) WHY ARE TWO ECONOMISTS FROM THE 18TH CENTURY, the 19th century, and the beginning of the 20th century, like Thomas Robert Malthus [1] and John Keynes [2], so relevant today in 2008?

Because their theories can help us to diagnose in part what is occurring in international economics and politics (Malthus), and offer us answers (Keynes) to solve the problems that have overtaken us, and which threaten to kill millions if drastic and urgent measures are not taken.

“The age of cheap food has come to an end, principally because demand has risen” The world’s most important economic journals (The Economist [3], Wall Street Journal [4], Financial Times [5], Harvard Business Review, The McKinsey Quarterly [6]) have dedicated extensive articles and documents to the same question: Why are food prices rising all over the world? The problem is complex, but it can be summarized in the following: the demand has risen much more than the supply.

The age of cheap food has come to an end, principally because demand has risen. In only the last 15 years, 400 million Asians have become incorporated into the world market as new consumers. It is probable that in the next 15 years another 600 million will be added–a new middle class surging from emerging countries, overall in BRIC [7]: , , Brasil and .

From my point of view, this is a greatly positive process not only of wealth creation in developing countries but also of the incorporation of millions of people into the world market. However, this process is generating strong tensions throughout the world as food prices rise, overall in the 30 poorest countries on earth, where millions of people are being pulled below the poverty line.

Developed countries should take this crisis as seriously as they do that which is affecting the financial markets. The global food crisis is a serious threat to world peace and stability.

If developed countries could fail to realize this, and fail to put fresh money on the table to subsidize food for the poorest, millions of people could die of hunger. In alone there are one billion people affected by this global food crisis, according to Rajat Nag, general director of the Asian Development Bank [8] (ADB). “The rise in prices does not affect everyone in the same way. There are winners and losers”

For the United Nations, the dramatic rise in food prices throughout the world has become an unprecedented challenge, of worldwide proportions declared the 27 heads of international agencies who met a few days ago in .

The secretary general of the United Nations, Ban Ki-moon, urged the international community to donate $2,500 million dollars to finance the World Food Program [9] (WFP). If these funds are not obtained, we will see a generalized hunger, malnutrition, and unrest on an unprecedented scale, he warned.

“Most probable is that food prices will continue to rise. The age of cheap food has come to an end” However, the rise in prices does not affect everyone in the same way. There are winners and losers. Producing nations that have a surplus of land, cereals, and water, and a productive capacity (Brasil and , for example) will benefit. But the nations that import food, like West Africa or the poorest countries in , will suffer strong convulsions. We should remember that in poor countries the percentage of salary dedicated to the purchase of food is extremely high.

Because of that, most probable is that food prices will continue rising. Analysts are not all in agreement as to whether prices will increase for two more years, or five, or ten. The age of cheap food has come to an end.

WHY DO PRICES RISE AND DEMAND GROW?

Since Malthus published his writings, the upset between supply and demand was resolved thanks to the stunning technological jump in the production of food: genetics, farming methods, advancement schemes, etc. Today the inequality has returned due to the entrance of new consumers from developing countries. And this new upset will be resolved –not immediately, but with a delay of a few years– thanks to innovation in science and technology.

“It is necessary to increase the global supply of food through existing technology and science, and to subsidize food for the world’s poorest, as well as progress with the freeing of trade” However, there are more explanations behind the sharp rise in the demand for food. I would stress the following: the use of harvests in the production of biocombustibles; or certain trends in , like the consumption of yogurt and other lactose products among youth; or the rise in meat consumption as identification with wealth among the new middle classes in developing countries. Inasmuch, the spectacular rise in petroleum prices (which has reached $120 per brent barrel) has a direct effect on inputs like fertilizers and herbicides, which, we should keep in mind, are derivatives of petroleum. It also affects climate change, which provokes droughts and floods. Logically, all this translates to a significant rise in prices.

If to all of these factors are added the restrictions on food exportation applied by countries like Argentina, Russia, Vietnam and Ukraine in order to –ostensibly– slow down inflation and increase negative collection (through withholdings or taxes) we can then explain why rice, the basic food for half the world, is worth 70 percent more since January of this year.

WHAT CAN BE DONE TO AVOID FAMINES?

If this problem of rising prices, which affects millions of people, is not resolved, there will be famines. What is needed is an increase in the global supply of food, through existing technology and science, and the subsidization of food for the poorest through the World Food Program (WFP), as well as progression in free trade. “The crisis between supply and demand could be alleviated in the years to come thanks to science and technology” Advice along those lines could have been expected from one of the economists I admire most: John Maynard Keynes (1883-1946), father of state interventionism and in large part the savior of capitalism from its own self-destruction.

Keynes said that it was necessary to utilize fiscal measures and monetary policies in order to confront periods of recession and cyclical crises in economic activity. His most important publication, The General Theory of Employment, Interest, and Money [12], is one of the major defenses of government intervention in the economy in subduing those cycles and stimulating demand in times of thin cows.

It is a fallacy to say that today there is not enough land to produce sufficient food. “Governments have to do everything in their power to stimulate the production of food, and not to hinder it” The crisis between supply and demand which we are experiencing currently could be alleviated in the years to come thanks to the science and technology which is already available and which will be developed in the near future. Already in existence is the knowledge and technology necessary to produce in a sustainable manner, with the help of biotechnology, through conservationist methods. Direct sowing is one example, and another the optimization of solar energy, etc. However, the process of equalizing food supply will only come about if the political decision is made to convert knowledge and available means into a greater production of foodstuffs.

REDUCING DISTORTIONS AND ADVANCING IN THE DEVELOPMENT ROUND

Governments need to do everything in their power to stimulate the production of food, and not to hinder it. Meanwhile, and until prices are stabilized, it is necessary to subsidize food for the poorest, in the true Keynesian way. This is an urgent need and an ethical imperative. “Now is the time to move forward in the freeing of trade, and to progressively reduce trade barriers, quotas, and subsidies for food production in the most developed countries”

Agriculture has been the most controversial theme in the Doha Development Round [13] of the World Trade Organization [14] (WTO). Developed countries maintain tariffs, quotas on importation, elevated subsidies, and tariffs valued at 200 billion euros annually, and they want neither to hear nor to speak about any possible reduction thereof. The European Union, the , and are the countries that most strongly support their farmers.

Although at the moment the disagreement between developed countries and the G20 is evident, it is, in my view, the right time to move forward in the freeing of trade, and to progressively reduce trade barriers, quotas, and subsidies for food in the most developed countries, as these subsidies distort international commerce. This would promote the production of food wherever possible, overall in developing countries.

BIOCOMBUSTIBLES ARE NOT THE PROBLEM

The Secretary-General of the United Nations, Ban Ki-moon, spoke about reducing subsidies for biocombustibles. President George Bush responded that only a small part of the rise in prices has been brought about by an increased provisioning of grains for the production of ethanol.

“Whether or not to detain the production of biocombustibles should not be the central theme of debate” Lula, the president of , went even further, saying that it was absurd to claim that biocombustibles are responsible for the global rise in food prices. Some want to attribute the global food crisis to biocombustibles. This is an absurd distortion, he said, and he reiterated his petition for the suppression of subsidies in rich countries.

I could not agree more with Lula. Whether or not to detain the production of biocombustibles should not be the central theme. There are those who believe that its production (derived from corn, beetroot, sugar cane, etc.) is an opportunity for producing countries, like . Others think that setting aside food as fuel is nonsense. I think that what is necessary is to augment international commerce in order to favor production in developing countries, and all that within the Doha Development Round of the World Trade Organization, which is the most appropriate framework for the job.

During various decades, , which is inefficient with regards to food production, subsidized its farmers in order to maintain low prices, which was justified by the postwar famines. The did the same thing. All of this, in turn, hurt production in developing countries, depriving them of their ability to compete. Now is the time to prioritize with regards to global production, subsidizing those who need it most.

The Italian writer Italo Calvino [15] said that the classical authors possess a richness, influence and vigor which leave behind a gap, and, with the passing of time, create a universe. This is precisely the legacy of two brilliant economists like John Keynes and Thomas Malthus, who today are back in style.