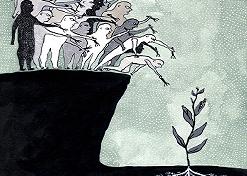 Nature provides ways for all species of animals to always have food. However, despite the planet’s potential and technological advances, decision makers have failed to be able to guarantee the provision of basic food for mankind.

(From New York) THERE IS A SILENT TSUNAMI APPROACHING. The price of food has almost doubled in the last three years, a fact that has caused the number of those suffering from hunger and malnutrition to grow by more than 100 million.

Twenty five countries have witnessed large-scale protests. “Amartya Sen: there is a cruel competition between gas tanks and the stomachs of the poor” In Haiti, the Cabinet of Ministers has been forced to resign. In the last few weeks, it has been reported that many people have resorted to eating biscuits made of mud just to alleviate their hunger.

A UN reporter, Olivier De Schutter, cited the production of bio diesel, which requires large amounts of water and energy and can lead to deforestation, as a cause for the late scarcity. He also noted a high level of concentration of power in the food production and distribution sector. And indicated the number of companies that provide farmers with seeds, pesticides, and fertilizer are limited and wield enormous economic power.

“The number of Latin American indigents will rise between 10 and 15 million due to the increase in food prices” Faced with the decision to replace the traditional use of cereal crops for fuel production, the Nobel Laureate in Economics, Amartya Sen, said in the New York Times [1] that there is a cruel competition between gas tanks and the stomachs of the poor.

To this is also added ecological imbalances, economic policies unfavourable to small farmers, the weight of speculation (which, incidentally, is currently being investigated by the US Congress), and the unstoppable growth of demand in China.

LATIN AMERICA: FOOD FOR EVERYONE THAT DOESN’T REACH EVERYONE

“The Pan American Health Organization has expressed alarm at the severely limited access to food with adequate density of macro and micronutrients” In Latin America, the impact is very serious. According to the FAO, Latin America has experienced a 57 percent increase in the price of cereals, dairy products, meat, sugar, and oils between March 2007 and March 2008.

ECLAC estimates that the number of Latin American citizens affected by destitution will increase between 10 and 15 million as a result of this increased food cost.

Indigents are people who are still devoting all of their income to food and do not have enough money, even by the minimum amount necessary for survival. The number of indigents could increase, then, to 84 million, while the number of poor could increase to 205 million.

“Latin America produces food for three times its population, but due to extreme inequalities, many of the poor have no means to buy it” The Pan American Health Organization has expressed alarm at the severely limited access to food with adequate density of macro and micronutrients. Also, the consumption of cheap food of high calorie content is on the rise, and there is a resurgence of nutritional problems.

This is all the more alarming because it all occurs on a continent that produces food for three times its population. However, because of extreme social inequalities, many poor people have no way of buying it.

This explains the unfortunate fact that 16 percent of the region’s children suffer from malnutrition.

“Fray Betto, emphasizes that nature provides ways for all animal species to always have food” It is difficult to argue that a lack of money is to blame for hunger, especially when we look at other investments which are equally important but not as vital. For example, last year, Regional Defence spending reached 50 billion dollars.

A prominent Brazilian thinker, Fray Betto, emphasizes that nature provides ways for all animal species to always have food.

However, internationally, despite the planet’s potential and technological advances, nature has failed to guarantee this basic level of provision for much of mankind. This reality is an ethical scandal whose persistence we cannot afford.