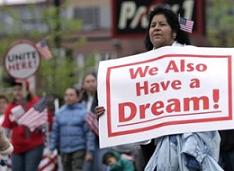 The annual purchasing power of the Hispanic community in the United States exceeds 830 billion dollars, but only 21 out of the 535 congressmen in both houses of Congress are Latino. The economic crisis, education and the failed immigration reform are among the complaints that Hispanics have for the next president. Their vote counts, and the principal candidates cannot avoid this fact: Latinos could define the elections.

(From Montevideo) THERE ARE SOME 47 MILLION HISPANICS residing in the United States. They are the fastest growing minority group: it is projected that the Hispanic population will nearly triple by the year 2050, reaching 133 million. This would represent an increase from 15 to 30 percent of the total population. This year, depending on how hard-fought the presidential election is, it will be one of the key factors –but not the only one– that will determine who will move into the White House.

Hispanics are currently dispersed throughout the entire Union without any specific pattern, and this might allow them to play a larger role in what are called the political swing states. The American presidential elections will be defined in five states with strong Hispanic presence: Florida, New Mexico, Colorado, Arizona and Nevada. At least, the candidates and their advisors, who have in place their own respective strategies to win over the country’s largest minority, understand it as such.

The weight of the Latino vote has become important even in other regions of the country, and this is shown by the efforts of the Democrat Barack Obama and the Republican John McCain to also be heard by Hispanics in the Midwestern states, among them Wisconsin, Iowa and Ohio, where the elections could be decided by as a little as a few percentage points. The former First Lady, Hillary Clinton, has known this since the primaries, and she rallied the Latino delegates at the Democratic National Convention to support the Obama-Biden ticket.

Both campaigns are using the Internet and other means of communication, especially electronic, to reach out to Hispanic voters. The Republicans launched a Spanish version of their convention’s web site, which includes live, step by step coverage. The Democrats are offering videos of coverage of their convention in Spanish through their website, as well as through an agreement with Comcast and Entravisión, which will make their information available in 20 of the most important Hispanic markets and on 48 Spanish radio stations.

“Existing voting patterns suggest that the inclusion of more Hispanics would give a greater boost to Obama” In the primaries, the Democratic candidates spent a record amount of money, over 4 million dollars, on Spanish advertisements on Univisión and Telemundo. The Republican candidates also ran Spanish advertisements, and McCain has broadcast ads for the general election in Spanish.

These expenses will probably be dwarfed by the massive amounts of money that will be spent through November, when the election takes place: Obama’s campaign has designated 20 million dollars to be used to connect with and mobilize Hispanic voters. Although they are national efforts, they will focus on the four swing states. The money will be spent on ads, online organization and voter registration, as well as a staff increase in key states and the training of about 500 Latino organizers.

Both candidates are working hard to get new voters to register. Existing voting patterns suggest that the inclusion of more Hispanics would give a greater boost to Obama. A survey published by the Pew Hispanic Center (PEW [1]), a research group with no party affiliation, showed that the Hispanic voters who are already registered favor Obama over McCain 66 percent to 23 percent. These figures reflect a steady recovery by the Democrats since 2004.

In the 2000 elections, George W. Bush captured the presidency thanks to a few votes in Florida, and he won in 2004 after winning by a landslide in the so called swing states, and gaining the historic support of more than 40 percent of the Hispanic voters. “If Obama takes Florida, McCain will not be able to become the 44th president of the Union” This level fell to 30 percent in the 2006 Congressional elections, when the Republicans finally lost control of the country’s legislative branch.

Today the Democratic Party has a strong advantage over the Republican party in terms of the number of registered voters, which could give it a good possibility of prevailing in one of the states that are considered key. If Obama takes Florida this November 4, Senator McCain will not be able to become the 44th president of the Union.

In 2004, the Democratic senator John Kerry lost in Florida by 381,000 votes, with a statewide participation of 74 percent. The analyses predict that this year there will be a participation of 80 percent: it is expected that the registry will consist of 10.5 million voters. With the candidacies of minor parties, like those headed by Ralph Nader and Robert Barr, the winner in Florida will need about 4 million votes. In order to reach this figure, Obama will have to double Kerry’s votes from 2004; he will have to capture more than 700,000 new votes.

“Florida’s 27 votes in the Electoral College are more than the combined votes in the other states where Hispanic presence is felt” In November there will be 1.3 million Latino voters registered in Florida, and some 555,000 will be Cuban American. Eighty five percent of their votes in 2004 were for George W. Bush. If the Democrats were to increase the Cuban American vote from the 15 percent that they received in 2004 to 25 percent, with a statewide participation of 80 percent, Obama would receive 100,000 more votes. This would occur if 50,000 Republican votes were to go to the Democrats, which is a possible occurrence that is within the analyses of the campaign strategists. The other support that Obama needs comes from Florida’s 750,000 non-Cuban Hispanic votes. If Obama manages to win 70 percent of these, with a participation of 70 percent, it will give him a Latino support of 200,000 votes outside of the Cuban American community.

As such, the Latino vote in Florida could be fundamental to Senator Obama’s bid for presidency. Florida’s 27 votes in the Electoral College are more than the combined votes in the other states where Hispanic presence is felt: Colorado has 9, and New Mexico and Nevada each have 5.

The survey of the national Hispanic vote by the respected PEW showed that 66 percent preferred Obama verses 23 percent who preferred McCain, with 11 percent undecided. What’s more, several surveys from the end of June gave Obama a 2 to 4 percent advantage in Florida. Seventy six percent of those surveyed had a favorable opinion of Obama, while for McCain that percentage stood at 46.

THE POTENTIAL OF THE HISPANIC VOTE

Hispanics have become the racial or ethnic minority with the greatest demographic concentration in the United States. They represent 15.5 percent of the country’s total inhabitants, even more than the African American population. “Potential Hispanic voters make up 8.9 percent of the American electorate, which is equivalent to 9.2 million possible votes” The Latino community is exhibiting the fastest growth among American ethnic minorities: a rate of 3.3 percent. At 27 years of age, they are also younger than the rest of the Americans; the average age of the country’s general population is 36.6. About 30 percent of Hispanics are younger than 18, which has led many to believe that the future of the United States is Hispanic. These data show that, within five years, one out of every four children between 5 and 9 years of age will be Hispanic, and in a decade, 25 percent of children between the ages of 10 and 14 will be.

Potential Hispanic voters make up 8.9 percent of the American electorate, which is equivalent to 9.2 million possible votes.

“Abstention also plays a role among Latinos” The difference between the total number of Hispanics in the country and those that are registered to vote can be explained by the fact that the majority are immigrants that arrived without documents, they lack citizenship, they haven’t yet reached the voting age or they haven’t enrolled in the electoral registry.

Abstention also plays a role among Latinos. In 2004, the Hispanic population that could vote in the presidential election was 7 percent of the electoral registry. However, only 18 percent exercised that right. In other words, 82 percent of the registered Hispanics did not vote. In contrast, 51 percent of the white population went to the polls, while the black community’s participation was 39 percent.

A VOICE THAT COUNTS, AND WILL CONTINUE COUNTING

For the 2008 elections, the Hispanic electorate has recorded an increase of 1.9 percentage points in comparison with 2004, and has gone from representing 7 percent of all registered voters to 8.9 percent, which in terms of potential voters is equal to approximately two million more people.

This increase is due to the fact that a considerable part of the Latino population, predominantly young, has reached voting age and registered in the electoral roll.

Such an increase was reflected in a growing Latino participation in this year’s primaries. According to the polls, the Hispanic vote was greater in 16 states– and in some cases three times greater– than it was in the primaries four years ago.

The University of Georgia’s Selig Center for Economic Growth indicates that the annual purchasing power of Hispanics exceeds 830 billion dollars. The Inter-American Development Bank (IDB) points out that Hispanics send 45.9 billion dollars worth of remittances to their families in Latin America. Hispanics are on the rise. However, at the moment there are only 21 Latino congressmen out of a total of 535 representatives.

The economic crisis, education and the failed immigration reform are among the complaints that Hispanics have for the next president. Their vote counts, and it will continue to count when it comes to getting into the White House. The millions of Hispanics know this, as do the candidates that are seeking them out.