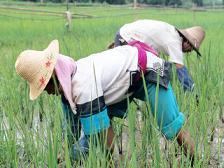 The new Chinese leaders have decided to leave behind what little remains of Maoism. The rural reform currently promoted gives evidence to an undeniable reality: the inexorable advance of the privatization of land, either directly or covertly, which is getting rid of one of the strongest signs of that China that was born in 1949, states the author.

(From Beijing) HOW MUCH TRUTH CAN there be to the alleged disagreements among China’s leadership regarding the new push for rural reform? The final communique of the third Plenary Session of the Central Committee of the Communist Party of China (CPC) held from the 9th to the 12th of October, in which the only thing worth mentioning is the objective of doubling farmers’ income before 2020, has provoked the speculations.

The truth is that so much reserve could simply be the product of a cautious internal strategy designed to avoid an extended prolongation of the discussion similar to the one witnessed in the years prior to the passage, in March 2007, of the law concerning private property (debated for fourteen years), or it could be meant to keep the controversy under control and limit the criticism of Hu Jintao’s initiative.

THE WORSENING OF THE RURAL EXODUS AND THE PROCESS OF URBANIZATION

The current Chinese leadership, “Facilitating the assignment of the rights to land will in turn facilitate the mechanization of agriculture, the economies of scale and exportation” conscious of the political consequences of prolonged oversight, has portrayed itself as have granted greater importance to rural areas.

Practically all of the tens of thousands of social incidents that are currently documented in China have started in the countryside, and almost a third of them have been caused by fraudulent expropriation of land by local authorities to benefit housing or industrial projects.

Hu Jintao has done away with the agriculture tax and promoted the new socialist agriculture, an effort to invest in social and material infrastructure to correct the rural population’s lack of equality with the urban one, which, in contrast, has not stopped growing, but has not been able to continue with the endemic corruption.

“It appears that preserving the CPC’s political control in rural areas and fostering a new increase in the standard of living without chipping away at its power is like trying to fit a round peg in a square hole” The rural reform being promoted right now raises two concerns. The first has to do with the social and economic dimensions. Facilitating the rental and the transfer or assignment of the right to use land could in turn facilitate the mechanization of agriculture and economies of scale, increase agricultural exports and put an end to small agricultural exploitation in the interests of the formation of larger entities, cooperative or not, by way of large exploitation.

But it will also influence, without a doubt, the worsening of the rural exodus and the process of urbanization, especially intense phenomena during the past three decades (the level of urbanization has grown by 24 percent since 1982), and processes that will inevitably intensify in the future, thus creating difficult situations to manage.

BURYING THE MEAGER REMAINS OF MAOISM

In the political sphere, the prospect of a progressive reappearance of great landowners that could overshadow the key role of the local authorities that today are at ease with them, and possess the ability and sufficient influence to erode the authority of the CPC in rural areas, generates more concern than the

“Although Hu Jintao played with symbolism by visiting the locality of Xiaogang, his grand promises have been left in the dark” attribution of more rights to farmers in order to deal with the abuses of power by the leaders of the villages, cantons, and towns of rural China, where, lest we forget, 56.1 per cent of the population (737 million people) still resides, with the average income being $591.40 in 2007.

It appears that preserving the CPC’s political control in rural areas and fostering a new increase in the standard of living without chipping away at its power is like trying to fit a round peg in a square hole. At first, this fear may have slowed the intensity of change in the interests of achieving a greater consensus that would reduce the fears of the local authorities to a reform that could affect them twice as much, both in regard to their political authority and their benefits.

And together with this, in the ideological realm, the advance of the privatization of land, either directly or covertly, appears to be inexorable, and is getting rid of one of the strongest signs of that China that was born in 1949. And although Hu Jintao played with symbolism prior to the plenary session by visiting the locality of Xiaogang, in Anhui, where the system of responsibility based on the family contract was begun, a system that spearheaded the Chinese reform in 1978 when Deng Xiaoping decided to apply it to the whole country in order to encourage economic development, thus turning it into a precursor of the second major rural transformation of the Popular Republic of China, his grand promises, at least for the moment, have been left in the dark.

Even so, there is no doubt that the new leaders appear dedicated to burying what little remains of Maoism, and in the countryside too. We will find out whether or not they have the sufficient strength to do so next March, when the CPC plenary sessions start up again.