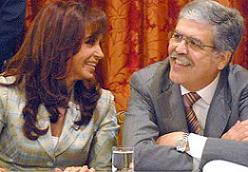 The suspicions and lawsuits regarding corruption and illegal accumulation of wealth that are piling up against the Kirchners and their close circle could cause some regression, says the author. He adds that Julio de Vido, Minister for City Planning, has already had nearly forty accusatory cases filed against him in the courts of the province of Buenos Aires.

(From Santiago de Chile) THE ARGENTINEAN REPUBLIC has always been a nation of great contrasts. Until a few decades ago, thanks to the fruits of the cultural development of its large and influential foreign neighborhoods –particularly the Italian one– Buenos Aires, the federal capital, was the only city in South America that welcomed the greatest world class artists, film directors, writers, and intellectuals. Almost simultaneously, it was one of the world’s great cultural centers.

“The Kirchner Fernández family has extensive political experience, having been in power for more than half of their lives” In the field of education, Argentinean universities achieved high levels of development, garnering international prestige. With respect to international commerce, who could doubt the country’s leadership in the fields of meat and wheat? To say the least, Argentina’s exportation of the latter was, in its day, the highest in the world.

In the more recent era, Argentina’s defeat in the Falklands War put the country on the global stage, and the still-remembered corralito (during which the government decreed that citizens could not withdraw cash from their bank accounts) plunged it into a profound economic depression, causing pessimism and desperation like never before, as did the issuance of patacones as a domestic currency to compensate for the lack of an official one. Perhaps the closest thing to this that the country has experienced was the the frustration and pain felt during the era of the gorilla governments.

As such, “The suspicions concerning corruption could be a possible trigger for regression, which could bring some bitter events with it” Argentina, blessed with great natural riches such as truly heavenly and fertile grassy meadows to fatten up their appetizing cattle, today faces a new turbulent and unpleasant scene. The Kirchner Fernández family has extensive and renowned political experience, and in fact they have been in power for more than half of their lives. If Néstor Kirchner’s government left behind a country with countless unresolved national issues, the current government of Cristina Fernández, his wife, is not doing much to reverse the situation, and even less to charm Argentineans again with a great national project.

However, the suspicions and lawsuits concerning corruption and illegal accumulation of wealth that are piling up against the Kirchners and their close circle could be a possible trigger for regression. “Elisa Carrió, has slipped in that the businessman Cristóbal López’s casino and gaming business is really a cover for Néstor Kirchner” It is a menacing virus, and if it infects the country it could once again cause it to experience some bitter events. The lawyer Ricardo Monner has filed fifteen complaints against the married couple by himself, and Julio de Vido, the Minister of City Planning and a friend of the Kirchner Fernández family, has already had nearly forty lawsuits filed against him in the courts of Buenos Aires.

Kirchner’s former opponent, and ex-candidate for the presidency of the republic, Elisa Carrió, has slipped in that the businessman Cristóbal López’s casino and gaming business is really a cover for Néstor Kirchner who, according to her, would be the true owner of these businesses. As part of her argument, Carrió points out that the granting of the the Palermo Racetrack dealership to López –through the year 2032– during the very end of his government would provide enough reasonable doubt to warrant an investigation of the operation. “The Kirchners certainly do not lack a fortune” Immediately afterwards, she indicates that the projected profit from this business, in the 6 billion dollar range, should manage to convince the authorities to begin an investigation.

The Kirchners certainly do not lack a fortune. The money collected from renting out their properties has been estimated to be around two million dollars annually, and a quick sale of land in El Calafate, Santa Cruz, to the Chilean economic group, Cencosud, managed to go for a hundred and twenty dollars per square meter. Keep in mind that the family acquired it a rate of two and a half dollars! Critics and opponents declare that the purchase, which was not acquired through a public bid, was simply an act of fraud against the Argentinean state.

RICH AMONG THE RICH

In the same way, others have declared that the price tag of the re-nationalization of businesses would have included prominent participation by the Kirchners, “Forbes Magazine declares Cristina Fernández to be the most powerful woman in the Spanish-speaking world” thus managing to triangulate national resources to the family fortune in the process. This must be added to the doubts regarding the legality, and the eventual acts that constitute a crime, of the abundant subsidies granted to private businesses, to prevent undesired increases in the prices of goods as much as to support certain economic activities.

The publication in Forbes Magazine of the wages of the one hundred most powerful women in the world placed Cristina Fernández at number 13, making her the most powerful woman in the Spanish-speaking world. Together with Michelle Bachelet (25th), president of Chile, they are the only Latin Americans to make the list. This position, which would be an honor for anyone else, becomes diminished for Mrs. Fernández in light of the large stack of judicial appeals in progress, all of which are linked to public treasure or unlawful accumulation of wealth.

If both the Argentinean populace and the international community is able to visualize the imminent instability of the Argentinean democratic system, with its consequent effects on the economy and interior peace, the country, which is in possession of places that conjure up images of paradise, could see itself submerged, yet again, in a profound social, political and economic crisis. And, as always, the human cost would unfailingly be transferred to the large, less-fortunate majorities.