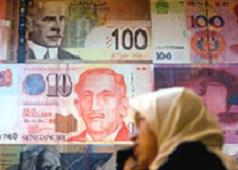 While the year 2008 will be remembered as an annus horribilis for the principal Western banking entities, the so-called Islamic banks will close out the year with it being of the best in their short history. Read on to discover why.

(From London) THE AMERICAN AND variable interest rate mortgage crisis does not appear to have affected the so-called Islamic banks.

The principal reason can be found in what is called Fiqh al-Muamalat, the Islamic rules of transaction, which prevents big risk taking (Gharar) “Islamic finances appear to be a safer business, but one in which profit margins are also much lower” as much as the resulting profit if the risk does not actually become real (Riba). Every school of Islamic jurisprudence (Madhab), from the most liberal, like Hanafi to the most conservative, like Hanbali, criticizes these operations. In contrast, they are in favor of other lower risk operations (yasir), and those that they consider to be permissible (halal).

Thus, the so-called Islamic finances, which are making fortunes in Malaysia and the Persian Gulf countries, appear to be a safer business, but one in which profit margins are also much lower. Thus, financial products like the so-called Sukut (the Islamic certificate) have already become an option for non-Islamic countries like South Korea and China.

SOME CONCEPTS OF ISLAMIC FINANCES

One of the principal concepts that differentiate Islamic finances from the rest is riba, or usury. “In some countries like Malaysia, more flexible financial mechanisms that nonetheless do not violate Islamic rules of transaction, have been established” Its origin lies in the introduction of currencies with ex-natura sua value – currencies that did not derive their value from their weight, but rather from the material from which they were made (gold or silver)- instead of those called fiat, whose value was based on their weight. Thus, with fiat currencies, if one agreed to a debt with a fixed compensation for that which was lent, it was not considered riba since its value did not vary. However, it was considered riba when a debt had a fluctuation margin, since those that contracted it could find themselves with a variation of the conditions agreed upon.

If we were to wish to buy a certain good X under Islamic rules, we would have to set, with the bank, the price of the good plus an extra amount that we would pay within a certain time period, which must also be established beforehand. “The benefit for the economy is that banks have reserve ratios of 100 percent, which makes the economy more reliable, although it allows for less leeway”In other words, it would be acquired by the bank that would sell it to us under the agreed conditions. However, the extra amount that we would pay would not be subject to the changing market conditions, which is why there is no room for speculation and it would not be considered riba.

In some countries like Malaysia, more flexible financial mechanisms that nonetheless do not violate Islamic rules of transaction (Fiqh al-Muamalat), have been established. An example is the mortgages called Musyaraka al-Mutanaqisa, whose success is based on the principle of shared risk/profit (Mudharabah).

When a house is bought, the bank and the buyer formalize a partnership. The financial entity rents the property to the buyer, who becomes the tenant and, without straying from Islamic rules, repays the amount according to the local market. “The birth of this type of capitalism, which some call Islamic capitalism, dates back to the Golden Age of Islam (the 8th to the 12th century A.D.)” Once the debt is liquidated under the agreed conditions, the partnership created between the bank and the buyer is terminated. In the case of a loss, the house would be auctioned off and the profits would be distributed among both parties of the partnership, according to their participation. This is the principle of Mudharabah, shared risk/profit.

In general, the benefit for the economy is that banks have reserve ratios of 100 percent, which makes the economy more reliable, although it allows for less leeway.

Other banking principles are joint ventures (Mudarabah), advanced payment for certain products (Bai Salam) and hibah: gifts that banks reward their clients with in light of the impossibility of offering them interest.

THE BIRTH OF ISLAMIC BANKING

The birth of this type of capitalism, which some call Islamic capitalism, dates back to the Golden Age of Islam (the 8th to the 12th century A.D.). “Those economies that manage to project a firmer and truer image will achieve a more sustainable and durable economic future over time” In this period, the necessary conditions were present – a currency with a stable value like the dinar and the incorporation of independent monetary regions – for the development of some concepts that favor stability and reject speculation.

However, the first Islamic bank was not created until 1963, when the Mit Ghamr was founded by Ahmad El Najjar, although he was trying to avoid any type of religious label whatsoever. In 1972, it turned into the Nasser Social Bank entity, which still exists today. However, the first modern Islamic bank, the Dubai Islamic Bank, was created in Dubai in the year 1975, and was the first of many currently in existence in the Persian Gulf, Malaysia and Indonesia.

In actuality, there are many banks that are called Islamic, and many others that are not have special accounts for customers who ask that they act in accordance with the Fiqh al-Muamalat. Even the powerful Dow Jones Industrial Average has an index – Dow Jones Islamic Markets (DJIM)- for businesses that respect Islamic rules, meaning those that do not deal in products prohibited by Islam like ham, alcohol, or gambling, and that respect the previously mentioned rules. For its supervision, the Auditing & Accounting Organization of Islamic Financial Institutions (AAOIFI) body certifies the compliance of said norms.

Leaving aside the religious questions that it entails, Islamic banking appears to be a more ethical element within these global markets accused of an excess of speculation and a necessary credibility. As such, those economies that manage to project a firmer and truer image will achieve a more sustainable and durable economic future over time.