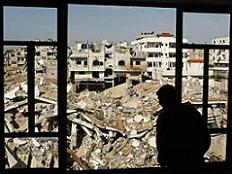 The author says that Israel now has to lead a massive humanitarian aid effort directed at the Gazan population, and make sure that Hamas does not continue with is weapons contraband effort. Israel must send a message of normalcy to the Palestinian population.

(From Jerusalem) THE CEASEFIRE BETWEEN Israel and Hamas has taken effect, a tense calm has returned to both sides of the border, Israeli troops have gradually begun to retreat from Palestinian territory and everyone is wondering and now what?

The immediate challenge is to take the necessary steps to ensure that the numerous Palestinians that have been left without a home can start anew. The population’s mourning for the 1,300 killed in the military offensive against Hamas, and the vital task of tending to the 5,000 injured, are only two variables in the equation. The living must be able to march forward, with some kind of hope for the future.

In southern Israel, after eight years of constant missile attacks from the Gaza Strip, the population wants to finally have a little bit of calm. Children and adolescents can’t remember days in which they haven’t walked down the street looking up and to both sides out of fear, making sure that there is a refuge close by that they could immediately run to if an alarm were to go off, knowing that they only have fifteen seconds to try to take shelter before the missile lands.

HAS A LESSON BEEN LEARNED?

“The feeling, for now, is that Hamas will not test the waters too much in the near future. However, this does not mean that it has learned a lesson in terms of forging another type of relationship with Israel”

The great question regarding the future is whether or not Israel did indeed manage to teach Hamas a lesson: make it understand that it will pay a heavy price if it attacks its civilian population again.

When they emerge from their bunkers and hideouts, Hamas’ leaders will comprehend the magnitude of the hurt that they have caused their people, said the Israeli Prime Minister, Ehud Olmert [1], along with his Minister of Defense, Ehud Barak [2], and the senior officials of the Israeli Defense Forces [3].

It is possible that in this sense, Israel’s deterrent ability is back, that Hamas now understands that Israel is done with the policy of restraint. Although, of course, this depends on how it will react to the eventual new provocations and isolated incidents that the organization will “The operation that has just ended has been only one more chapter in the conflict between Israel and the Palestinian extremists, and not its conclusion” use to test the limits and new rules of the game.

The feeling, for now, is that Hamas will not test the waters too much in the near future. However, this does not mean that it has learned a lesson in terms of forging another type of relationship with Israel. It can refrain from firing missiles to the south, maybe even for quite some time, but it is neither laying down arms nor proclaiming itself to be in favor of recognizing Israel or accepting the country as a legitimate neighbor.

The problem is that all signs point to the operation that has just ended as having been only one more chapter in the conflict between Israel and the Palestinian extremists, and not its conclusion.

PEACE WILL NOT BE WHAT COMES

Declaring the end of the existing war goes against the very essence of Hamas, even though there have been statements made in favor of a Palestinian State within the 1967 borders. Said statements were immediately followed by others which clarified that that would not signal the end of the conflict.

“Peace with Israel is not what will come. And not just due to the hate generated by the destruction in Gaza, but above all, because of the very nature of Hamas” But almost by definition, Hamas cannot accept the very existence of Israel, whose territory is considered waqf [4], very sacred in Islam, and something that no Muslim (Palestinian or not) has the right to renounce.

They look beyond the Palestinian agenda, they can’t change it, Fares Kadura, one of the leaders of Fatah [5] in the West Bank [6] told us upon analyzing the current situation. Hamas is part of the global Islamic movement and that determines its stance, not only the Palestinian issue.

Bearing this important idea in mind, there is no lesson to be learned. Hamas can understand, for tactical reasons, that for some time it cannot and must not do anything. Egypt’s warnings regarding the matter worked. And if it wants the Rafah border crossing [7] –the only direct contact between Gaza and the Arab world– to be opened, it only made it that much more worthwhile for them to listen to President Hosni Mubarak [8]‘s demand for an immediate ceasefire.

But peace with Israel is not what will come. And not just due to the hate generated by the destruction in Gaza, but above all, because of the very nature of Hamas, for whom Israel’s sovereign territory, and not just the disputed occupied territories, is an occupied area.

As always happens during dramatic times, voices calling for Israel to talk to Hamas, to try the dialogue route, are emerging upon seeing that the armed conflict has not resolved anything.

“Israel now has to lead a massive humanitarian aid effort directed at the Gazan population” They continue to be a minority. In the midst of the controversy concerning whether or not it would be wise to do so, Israel’s official position remains clear: in the lightning summit with European leaders held in its official residence, Prime Minister Olmert made it clear – and he seems to have received a good response for it – that talking with Hamas now would be a terrible mistake. It doesn’t look like Europe is going to change its stance regarding the issue for the time being. The excessive force used by Israel was criticized, but there was also a full awareness of the missile attacks carried out against Israel for years. The result: condemnation of the offensive’s force, but also a long, accusing figure pointed at Hamas.

But Israel has a lot to do even if it doesn’t talk to Hamas. Offering sincere condolences for the deaths of innocent civilians, and issuing formal statements that clarify to what degree it attempted to avoid injuring those not involved, are indispensable elements. But insufficient.

Israel now has to lead a massive humanitarian aid effort directed at the Gazan population. Even if a lot of what they do will inevitably run into reactions like they kill us and then they want to help us, Israel must move forward with it, intelligently and with an open mind.

It also must focus on negotiations with the Palestinian National Authority, in such a way that the people can only reach the conclusion that, while Hamas brings them tragedy, those who accept dialog obtain concrete results. “The message must be strengthened, by removing the greatest number of highway checkpoints that limit mobility within the West Bank possible”

The comparison that the Palestinians can now make between the tragedy of life in Gaza under Hamas and greater economic stability and daily tranquility in the West Bank is a fact.

But the message must be strengthened, by removing the greatest number of highway checkpoints that limit mobility within the West Bank possible, and increasing the number of permanent work permits for those Palestinians that want to work in Israel, after passing a security check. And more than anything, the population of Gaza must be allowed to feel freer, and not feel cut off from Israel.

Israel, in turn, has no problem with studying the records of each and every person who asks to leave Gaza to work in Israel. As such, it should carry out strict background checks and once again allow Palestinians in Gaza to support their families by working in Israel.

They are possible risks that a country like Israel, with the great amount of attention it pays to security, can deal with. And with this, the population is given a clear message regarding what the alternatives to the extremism of Hamas are. It is possible that suicide bombers will try to slip in amongst the workers, but we can also trust that the Israeli security service is capable of intercepting them.

It will be a message of normalcy to the Palestinian population, that, as the Israeli authorities repeatedly say: they are not the enemy. The only enemy is terror.

AND THE ROLE OF EVERYONE ELSE

But the key thing, so as to prevent Hamas from reconstructing its arsenal, is guaranteeing that the weapons contraband does not reach its destination. “The solution would be not allow the people to be incited to hate, the use of children for violent messages and the development of a mentality that glorifies death and not life, to come from the population itself” The international community should also play a role in this.

And no less important, its promises for aid to reconstruct Gaza must be kept, so that Iran’s money cannot have any influence. Iran has been dedicated to arming Hamas with explosives and missiles for years, nd now it will want to win over hearts by promising aid.

Of course, with eyes to the future, for Gaza to avoid experiencing another three weeks of tragedy, and for southern Israel to not go through another tense and dangerous eight years, the ideal thing would be for the population itself to understand that Hamas is not the solution. That protesting against the corruption of the Palestinian National Authority doesn’t have to lead to choosing those who consider it a blessing to die in the name of Allah.

The solution would be for the determination to not allow the people to be incited to hate, the use of children for violent messages and the development of a mentality that glorifies death, to come from the population itself.

If this were to be achieved, the Israelis would win. But the first to benefit would be the Palestinians themselves.